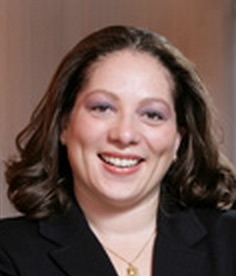 Interesting Details: Was a White House Fellow where she worked for the Secretary of Labor (Alexis Herman); studied at Oxford University in England as a Thoroun Scholar; was Co-Founder and CEO of Site59; was CEO of Travelocity; was CEO of Gilt.com; board member of Gilt.com, Nike, and TechnoServe; oversaw Travelocity's award-winning "Roaming Gnome" marketing campaign; named "100 Most Creative People in Business" by Fast Company; grew up in Middletown, New York; lives in New York City with her husband and two children.

I grew up at the right time. When I was 26 years old, that's when the internet started to take off. This was around 1998 and 1999. It was a time of imagination and possibility. We could start changing how we shopped and engaged with consumers. You could ask whether we really needed to go to the store to buy something or look in a book that was published two years ago to pick a hotel when you travel. It was exciting and drew me in. You could rethink how we purchase products. Then, you could build new approaches and businesses that hadn't been conceived of before.

Plus, I was raised in a family of entrepreneurs. Both my father and grandfather were entrepreneurs. My dad started his own company and I witnessed how he had passion for his clients. I've been fortunate to have great mentors throughout my life and career - with the first being my parents. They always pushed me to be and do better. When I was a kid, I wanted to be either a flight attendant, the first female president, or a baseball player. But I've always been an entrepreneur at heart. As a teenager, I started my own swim school, and my father encouraged my drive and creativity in business.

Today, I see myself as a CEO who loves transformative times, the digital age, and working with teams I love. I like operating in a space where companies meet consumers online. I enjoy building strong organizational cultures and leading people. I'm also drawn to underdogs. They allow space to innovate and room to take risks. When my travel company Site59 - which sold last minute travel packages - was bought, Travelocity was seen as an underdog. I loved the challenge of being able to grow a business and serve as Travelocity's CEO for six years. I've also enjoyed helping to grow Gilt from a start-up to a company that offers millions of shoppers access to fashion.

Experiencing what happened during 9/11 was a game-changer for me. I had already started Site59, and our office was two blocks from the World Trade Center. I was 29 years old - going through a situation where you don't know where people are and you see things no one should have to see. I had to speak to parents of employees and tell them I didn't know where their child was. Thankfully, no one was hurt. After the attacks, revenue fell and we started to burn through more money than ever. It was a challenging time as we worked to recover and get back on track.

I learned a lot about myself, what it takes to motivate people, and the limits of individual strength. It was an exhausting few months - mentally and physically. I remember one weekend when I went to church and got lost walking home. I was confused about where I was even though I had been going to that church for years. I realized I hadn't fully processed what had happened. It was weeks later and it just hit me all of a sudden.

Living through 9/11 was a big leadership lesson. Eventually, we became profitable while also cooking dinners for our local firehouse. I learned to be ferocious in facing challenges and chasing dreams, and how to lean on my team.

I've faced some big challenges during my career. The biggest was 9/11. When the airlines shut down, our business dropped 95%. We didn't sell anything for three weeks. That's why we burned through so much cash. Plus, we were traumatized. We didn't know if our business would survive. We did. Site59 was eventually acquired by Travelocity.

I've also faced challenges at Gilt. For a time, we were driving towards taking the company public. But the IPO and retail market changed, which affected our performance. Recently, Gilt was acquired by Hudson's Bay Company - the luxury department store company that owns Saks Fifth Avenue and Lord & Taylor. It's always difficult to motivate people and keep them energized through change and hard times. If you're going to dream big, then you're always going to face challenges. That's when you have to draw on your intelligence, grace, creativity, persistence, curiosity, and humility to effectively lead and manage people, and overcome the hurdles in your way.

I believe passionately that the best talent works for people who keep them on a mission and care deeply about their personal growth and success. This growth isn't just about work but about the full person too. I've worked hard to attract the best people and make sure we have a clear vision so I can be a strong leader. I'm also endlessly open and curious about the world's changing circumstances, which is especially critical for a digital CEO.

I've also worked hard to make sure I clear obstacles for people and understand what drives people - who they want to be, how they want to grow - and then challenge them to do more than they thought they could. Personally, I'm not hierarchical, I don't like physical offices, and prefer open space. I think a lot about how to scale values for teams and maintain tough standards and high performance thresholds while still being very passionate about the team. When companies grow and go global, you have to maintain your humanity, approachability, and exacting standards.

I've had a lot of tough negotiations during my life, even when I was a kid. At age ten, I negotiated with my parents to get a cat. I wrote two papers for them - one about Michelle with a cat who turned out to be a great person, and another version about a catless Michelle who ended up being a derelict. It took time, but eventually I got the cat.

When thinking about business, most negotiations are tough and test the limits of relationships. You can't push too far. You have to understand the other side - who are they, what's their perspective and important to them, are they defensive, what the emotions are, and what they bring to the table. In my career, I've needed a wide toolbox to flex and compromise. You have to adapt your style and comfort zone to the situation. I've used this during my career.

When at Travelocity, we had a big issue with a vendor's errors. I was angry, but we couldn't reach a deal. I forced everyone to sit in a room to get a deal done and make the relationship work. I focus on maintaining relationships, integrity, and "EQ" considerations.

I try to be fiercely intellectual, driven, and competitive. But I also try to have humanity and grace to balance this out. My goal is to see what people contribute each day and try to motivate them, and to see people as whole humans beyond just work. I've been fortunate to have people who've moved and worked in different places with me.

Everyone's experiences give them a different perspective. I'm confident enough to be humble. I'm not the "Ivory Tower" person who surrounds herself with people who say what I want to hear. I'm not the CEO who's defensive and blames everyone else. I will take it on the chin when I could have done better or we could have done better. It's important to me to always learn and get better along the journey.

My parents instilled enough confidence in me to have a desire to see others excel and continually push myself to get better at what I do.

I'm proud of many things from winning awards, being a White House Fellow, and turning around Site59 after 9/11 to my accomplishments at Gilt, Citigroup, and Travelocity. There have been a lot of accomplishments in my career. But at the end of the day, it's really about the bigger picture.

My proudest achievement is being a mother, great CEO, and integrating both of those into my life. I'm home by 5:15pm so I can be with my husband and children before they go to bed. I want to be a great mother, wife, and CEO. I work at night after my children are asleep. I've brought them to work and to distribution centers the day after Thanksgiving to surprise my team and hand out cookies. I'm trying diligently to teach my kids about hard work. To blend being the mother, wife, and CEO you want to be is a daily exercise and challenge.

There's no accomplishment that would be worth it if I also didn't feel like I were a great parent. My children give me inspiration to be a great leader. Children watch and learn from you, just like I learned from my father as he taught me during my life and childhood.

The Azara Group selects a business leader each month to share insights about leadership, being an influencer, and career development. Our objective is to help support your ability to flourish as a leader and share what makes people thrive in business.