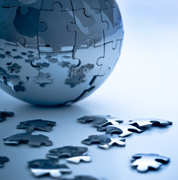 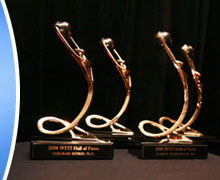 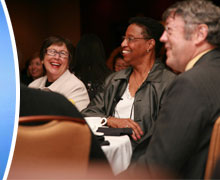 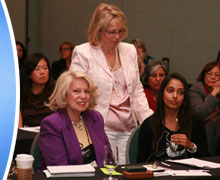 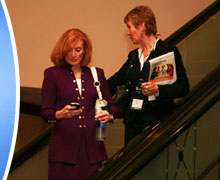 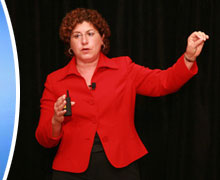 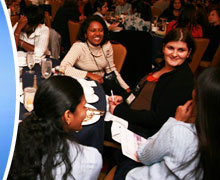 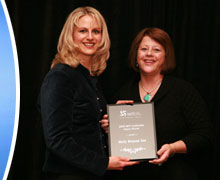 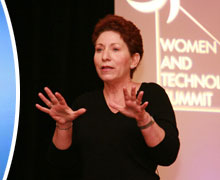 Media & Downloads
Conference Attendees and WITI Members can Access Exclusive PDF's, Powerpoints, Audio and Podcasts as well as Event Photos and Videos of Hall of Famers!

Sponsors & Exhibitors
WITI would Like to Thank All of our 20th Anniversary Sponsors and Exhibitors... Details!

Join Us for the 2009 WITI Hall of Fame Dinner and Awards Ceremony @ WITI's 20th Anniversary Summit in the Silicon Valley!

WITI's Hall of Fame was established in 1996 to recognize, honor, and promote the outstanding contributions women make to the scientific and technological communities that improve and evolve our society.

This year's WITI Hall of Fame dinner and awards ceremony, hosted by Shira Lazar of NBC's First Look, will be held on Monday June 15, 2009 @ 6:30pm.

Patricia Cowings began her career at NASA more than 30 years ago as the first African-American female scientist to be trained as an astronaut payload specialist. After working on Spacelab Mission Development-3, a simulated space shuttle mission, her experiment to study how astronauts adapt to the weightlessness of space was selected to fly on the STS-51B and STS-51C shuttle flights in 1985. This led Cowings to design an ambulatory instrument that made it easier to monitor the astronauts' physiological responses in space.

Cowings has continued to apply her space and aviation experience as the principal investigator of the Psychophysiological Research Laboratory at NASA Ames Research Center, Moffett Field, Calif. At Ames she develops non-medical methods that help astronauts adapt faster to space-induced physiological changes. Her research has resulted in the NASA patented Autogenic Feedback Training Exercise (AFTE). The AFTE method and system is used to train people to monitor and voluntarily control a variety of their own physiological responses to reduce symptoms of motion sickness and environmental stress.

Cowings has held several adjunct professorships at many universities and her work is on permanent display in the Smithsonian Air and Space Museum, Washington, D.C. She engages in community outreach and mentoring programs and has been featured in several K-12 textbooks on the accomplishments of women and African Americans.

Maxine Fassberg is Vice President of the Technology and Manufacturing Group for Intel Corporation, Fab 28 Plant Manager and Intel Israel General Manager. She joined Intel in 1983 and has held numerous positions since then. From 2000 to 2004 Fassberg was Fab 18 Factory Manager. She was instrumental in the Fab 18 start-up, ramp and the factory winning the Intel Quality Award in 2004.

Fassberg received a Master's degree in Applied Chemistry from The Hebrew University of Jerusalem in 1978. She began working as a teacher prior to coming to Intel, first at a high school teaching physics and chemistry, then at The Hebrew University training teachers in chemistry. Maxine Fassberg is married to Joseph Fassberg, a renowned physician in Jerusalem, and they are the parents of Guy and Liat Fassberg.

Dr. Sharon Nunes leads IBM's Big Green Innovations organization, a worldwide team of IT and domain experts who are developing solutions in water management, carbon management and photovoltaics. Together with clients and partners, Dr. Nunes is demonstrating how information technology plays a critical role in managing the world's water systems. Dr. Nunes has held numerous executive positions leading key growth initiatives for IBM, including the position of Vice President of Technology, working with IBM's Chairman and the senior executive team to set the company's technical agenda.

In 1997, Dr. Nunes was responsible for the launch of IBM's Computational Biology Center, and was one of the executive leaders of the Life Sciences business unit, which was launched in 2000. She is an advocate for women in technology, and was awarded the Frances E. Allen Mentoring Award in 2004, and in 2006, she was named a NAFE "Women of Excellence" national award winner for her impact in mentoring technical women.

She is a leader on IBM's Women in Technology Executive Committee, launched IBM's Technical Women's Leadership Forum in 2007, and is a member of IBM's executive advisory council for SWE (Society of Women Engineers). In 2009, Sharon was designated a Women's History Month Honoree as one of the "Women Taking the Lead to Save our Planet."

Dr. Carolyn Turbyfill has consistently shown her commitment to creating an environment where women can feel supported and grow in their technology careers. She is a Founding Member of WITI. She has also served on the advisory board of Astia (www.astia.org), formerly the Women's Technology Cluster. In 2007, she led a delegation of distinguished women to China for the People to People Ambassador Program.

Carolyn's first research project in the field of Computer Science was the Wisconsin Benchmark that pioneered benchmarks by which relational database systems are measured today. She has advanced her career with milestones consisting of the first commercial implementations of leading edge products such as: the first firewall appliance, SunScreen SPF-100 and SKIP, one of the first commercial Virtual Private Networks (VPN); the first managed security service and the first round trip email marketing service.

While at Sun Microsystems, she worked with CISSP, a coalition of companies, on changing export controls on encryption. As VP of Engineering at StackSafe, she led the team that developed the StackSafe Test Center, which was named the 2008 ITIL Innovation of the Year. Dr. Turbyfill has a Ph.D. in Computer Science from Cornell University in Ithaca, New York.

Shira Lazar has made her name on TV as host of the weekly lifestyle magazine show FIRST LOOK and OPEN HOUSE on NBC, and as a correspondent on Reelz Channel's daily movie news show DAILIES. You can catch her own daily adventures in lifestyle, entertainment and tech on her blog, The Pop Report, where she has partnered with Nokia to lifestream "On the go" video uploaded directly from her phone. Her most recent projects include hosting DirecTV's live one-hour interactive special from the Detroit International Auto Show, participating as a social media maven on Ashton Kutcher's 24 HOURS AT SUNDANCE and as a blogger/vlogger on Travel Channel's upcoming CONFESSIONS OF A TRAVEL WRITER. Shira also appears frequently on Fox News Channel, CNN and MSNBC.

A native of Montréal, Shira grew up surrounded by a melting pot of cultures speaking both English and French. At the tender age of 18, she decided to leave the cold in Canada for... the cold in Boston where she studied at Emerson College and graduated as a Dean's scholar, with honors and a BA in TV/ Video Production. Her last semester found her in the Los Angeles. By day, she interned at the Ellen DeGeneres Show. By night, she produced Skip Kelly's ALL REQUEST NIGHT on STAR 98.7 FM. During this time, Shira's on-air personality truly shined when Skip also brought her on board as his co-host for HITMAN IN THE MORNING, recorded from the Clear Channel headquarters in L.A. and aired on KISS 106.7 FM in Rochester, NY. After spending way too much time as a student finding ways to host TV and radio shows instead of going to frat parties, Shira realized her true passion as a broadcaster and communicator.

Upon graduation, she was hired as an Associate Producer/Correspondent of a KVVU FOX morning talk show, THE VEGAS SHOW WITH SHEENA EASTON AND BRIAN MCKNIGHT. Shira then started moving up the media ladder developing/hosting online video content for Yahoo!, AOL, Movies.com, Hollywood.com, Mania TV, Verizon VCAST, LXTV, Hollywood Life, Live Earth and Myspace. On TV, Shira has also worked as a West Coast correspondent on Court TV's HOLLYWOOD HEAT and as a host of DIRECTV'S music show, HAVOC ON THE 101. Her talents have also allowed her to write for notable publications like The Hollywood Reporter and Los Angeles Confidential Magazine.

She was the official video blogger for the Webby Awards WebbyConnect Summit, participated in the campaign for the Generation We book, and has been chosen as the host/moderator for tech conferences including Twiistup, Digital Family Reunion and Girls in Tech. She is a member of American Women in Radio & Television and Women in Technology International, for which she will be emceeing the 20th Anniversary Hall Of Fame. Shira is constantly finding ways to use her passion in broadcasting and new media to spread the word about philanthropic causes including Charity:Water and Global Green USA.

As a crossover personality and hybrid journalist, Shira Lazar continues to bridge the gap between old and new media and and be a voice for the millenial movement.