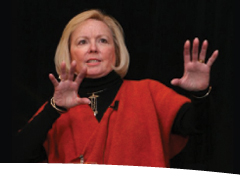 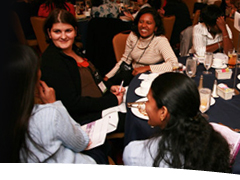 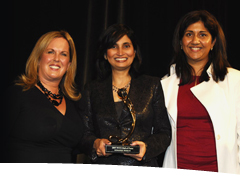 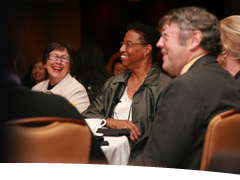 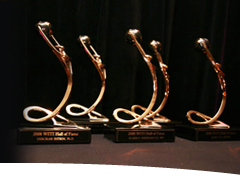 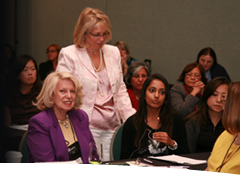 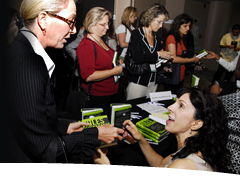 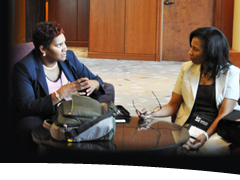 Summit Recap
Exclusive Media and Downloads for WITI Members and Summit Attendees will be Posted Soon... For a Summit Recap, View Event Photos or Watch Hall of Fame Inductee Videos!

WITI Hall of Fame Awards
Five Leaders in Science and Technology will be Honored at WITI's 15th Annual Hall of Fame Dinner and Awards Ceremony... Details!

Executive Auction
Join Us for a Career-Propelling, High-Energy, Must-be-There Event in Support of the Women in Technology Foundation... Details!

Sponsors & Exhibitors
WITI would Like to Thank All of This Year's Summit and Hall of Fame Sponsors and Exhibitors... Details!

Join Us for the 2010 WITI Hall of Fame Dinner and Awards Ceremony!

Five leaders in science and technology will be honored at the 15th Annual WITI Hall of Fame Awards Dinner on September 13, 2010 in conjunction with WITI's Women and Technology Summit. Katie Boehret, reporter for The Wall Street Journal, will serve as MC. Click Here to Download the Press Release.

The WITI Hall of Fame was established in 1996 by WITI to recognize, honor, and promote the outstanding contributions women make to the scientific and technological communities that improve and evolve our society. Click Here for Bios and Videos of Previous Inductees!
2010 WITI Hall of Fame Inductees


Sandy Carter is currently Vice President, IBM Software Group Business Partners. She was one of the first technology industry executives to recognize the value of social media and how it can be applied to business. She is a leading SOA industry expert and has led IBM to its market share leadership in this space. Her work enabled social media to become mainstream, assisting hundreds of companies to use Web 2.0 technology to drive business results. She is the first woman in the industry to write a book on a social media framework (ANGELS) and has taught social media and Web 2.0 skills to more than 50 universities. She founded the IBM Super Women's Group, a networking and mentoring group for IBM women in technology. In 2009, "Everything Channel" named Sandy Carter one of the most powerful 100 women in channels.

Dr. David is President and CEO of Analytic Services Inc., a not-for-profit corporation providing objective analyses to strengthen national and homeland security. Dr. David was elected into the National Academy of Engineering in 2002 for pioneering the use of digital information technologies for testing, simulations, information processing, and telecommunications for high-reliability applications. From 1995 to 1998, Dr. David was Deputy Director for Science and Technology at the Central Intelligence Agency. As technical advisor to the Director of Central Intelligence, she was responsible for research, development and deployment of technologies spanning the intelligence process. Upon departure from this position, she was awarded the CIA's Distinguished Intelligence Medal.ĘDr. David serves as a role model to all scientific and technical professionals through outreach via speaking engagements and her dedicated service to the Nation.

Dr. Goldberg was a central participant in the invention of personal computing and pervasive networking at Xerox PARC, as one of the designers of the first completely object-oriented programming language and environment. As founding Chairman and CEO of ParcPlace Systems, Inc., she led the effort to commercialize this Xerox technology. Dr. Goldberg was president of the ACM from 1984 to 1986, and she won the 1987 ACM Software Systems Award with Alan Kay and Dan Ingalls. She has designed systems to author and deliver online courses as part of an educational company formed to enhance both equity and high achievement in secondary school math and science, to support collaboration among international neuroscientists and mental health experts, and to enhance strategic management of pharmaceutical drug development teams. She is an advisor to ViewPoints Research Institute and a long time Board Member of the SF Exploratorium.

Dr. Wee is the CTO of Client Cloud Services at Hewlett-Packard. Dr. Wee is dedicated to improving the way we use and experience technology today, simplifying the user experience for personal, social, and cloud computing and creating immersive communication and collaboration experiences. She co-edited the JPSEC standard for JPEG-2000 image security, which provides security for scalable media. She developed technologies for digital television in the 1990s and mobile video for cell phone networks and immersive videoconferencing in the 2000s and is now developing client-cloud experiences and services. Dr. Wee spent 10 years at MIT, earning her bachelor's, master's, and Ph.D. degrees in electrical engineering and computer science. Dr. Wee also developed the "Researchers In Residence" Program, a unique residency program that gives MIT graduate students the chance to work in industry while tackling challenging, compelling problems alongside leading HP Labs researchers.

Everyone knows her as Dr. Ruth, the woman who survived the Holocaust orphaned only to become one of the most famous science educators in the world candidly relating to millions on all issues concerning human sexuality through mass media. The 82 yr. old grandmother still shares her expertise with humor to vast audiences and challenges the scientific and academic community to further serious research. Dr. Ruth opened up an entire field for women by serving as a role model to other women writing books and speaking publicly about sexual and reproductive freedom. She is a Fellow of the New York Academy of Medicine, Yale and Princeton Universities and a full Professor at NYU. She has twice been named "College Lecturer of the Year." She is currently serving as the Honorary President of the Council on Sexuality and Aging at the National Sexuality Resource Center.

Katherine A. (Katie) Boehret is a reporter for The Wall Street Journal, where she has worked since 2002 in the office of columnist Walt Mossberg. She writes the weekly Mossberg Solution column, a review of consumer technology that appears in the paper and online every Wednesday, and creates a weekly video that coincides with the column. She appears weekly on ABC's "America This Morning" to discuss her weekly reviews.

Ms. Boehret has appeared on ABC's "The Martha Stewart Show" as well as on BBC World News. In 2004, and again in 2007, she was honored as one of the 30 most promising young business journalists by Newsbios.com.

Ms. Boehret is a graduate of the University of Delaware.