The 2012 WITI Hall of Fame Dinner and Awards Ceremony 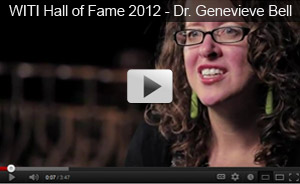 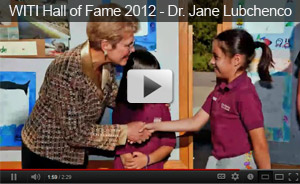 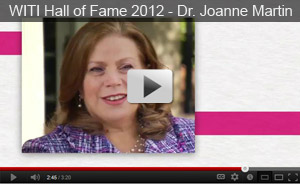 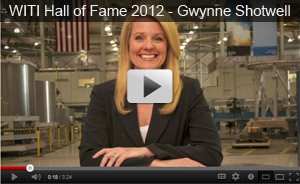 Key leaders in science and technology were honored at the 17th Annual WITI Hall of Fame Awards Dinner on Monday, June 4, 2012 in conjunction with WITI's Annual Women Powering Technology Summit in the Silicon Valley.

The WITI Hall of Fame was established in 1996 by WITI to recognize, honor, and promote the outstanding contributions women make to the scientific and technological communities that improve and evolve our society.

Click Here for Bios and Videos of Previous Inductees!

Dr. Genevieve Bell is an Australian-born anthropologist and researcher. As director of User Interaction and Experience in Intel Labs, she leads a research team of social scientists, interaction designers, human factors engineers, and computer scientists. This team shapes and helps create new Intel technologies and products that are increasingly designed around people's needs and desires. In this team and her prior roles, Dr. Bell has fundamentally altered the way Intel envisions and plans its future products so that they are centered on people's needs rather than simply silicon capabilities.

In addition to leading this increasingly important area of research at Intel, Dr. Bell is an accomplished industry pundit on the intersection of culture and technology. She is a regular public speaker and panelist at technology conferences worldwide, sharing insights gained from her extensive international field work and research. In 2011 she co-wrote "Divining the Digital Future: Mess and Mythology in Ubiquitous Computing" with Prof. Paul Dourish of UC Irvine. In 2010, Dr. Bell was named one of Fast Company's inaugural "100 Most Creative People in Business." She also is the recipient of several patents for consumer electronics innovations.

Moving to the United States for her undergraduate studies, she graduated from Bryn Mawr with a bachelor's degree in anthropology. She then attended Stanford University, earning her master's degree and a doctorate in cultural anthropology, as well as acting as a lecturer in the Department of Anthropology. With a father who was an engineer and a mother who was an anthropologist, perhaps Dr. Bell was fated to ultimately work for a technology company, joining Intel in 1998.

Dr. Jane Lubchenco has been the under secretary of commerce for oceans and atmosphere and administrator of NOAA since 2009. Nominated by President Obama in December 2008 as part of his "Science Team," she is a marine ecologist and environmental scientist by training, with expertise in oceans, climate change, and interactions between the environment and human well-being. She received her B.A. in biology from Colorado College, her M.S. in zoology from the University of Washington, and her Ph.D. in ecology from Harvard University. Her academic career as a professor began at Harvard University and continued at Oregon State University until her appointment as NOAA administrator.

Under Dr. Lubchenco's leadership, NOAA has focused on restoring fisheries to sustainability and profitability, restoring oceans and coasts to a healthy state, ensuring continuity of the nation's weather and other environmental satellites, developing a Weather-Ready Nation, promoting climate science and delivering quality climate products, strengthening science and ensuring scientific integrity at NOAA, and delivering the highest quality science, services, and stewardship possible.

Dr. Lubchenco has served on numerous commissions and studies; as president for the American Association for Advancement of Science (AAAS), the International Council for Science, and the Ecological Society of America; and as a member of the National Science Board.

Before coming to NOAA, Dr. Lubchenco co-founded three organizations (The Leopold Leadership Program, the Communication Partnership for Science and the Sea [COMPASS], and Climate Central) that aim to communicate scientific knowledge to the public, policy makers, media and industry; she also co-founded a research consortium, PISCO, which studies the near-shore ocean along the coasts of Oregon and California.

As a Distinguished Engineer and Vice President of Technology, reporting to Linda Sanford in IBM's Enterprise Transformation organization, Joanne Martin is responsible for supporting the development of IBM's technical strategy and for the global technical community. She is Past-President of the IBM Academy of Technology. Prior, she was VP of Infrastructure Management Services for Global Technology Services (GTS), responsible for providing a consistent and coherent architecture for the development and delivery of service products in the transformed GTS. Dr. Martin was the Business Line Manager for Scientific and Technical Computing for the RS6000 Division, responsible for IBM's high performance scientific computing systems. She served on the management team that developed and delivered IBM's first supercomputer, with specific responsibility for the performance measurement and analysis of the system.

Dr. Martin was founding Editor-in-Chief of the MIT Press Journal of Supercomputer Applications, and on the steering committee that created the successful ACM/IEEE conference series on High Performance Computing and Communications - chairing the conference in 1990 and chairing the technical program for 1998. She has served as an advisor to the Department of Energy, National Science Foundation, and National Research Council. She was named by Working Mother magazine as one of the 25 most influential working mothers for 1998.

Dr. Martin earned a Ph.D. in Mathematics from the Johns Hopkins University. She began her research career at the Los Alamos National Laboratory, where she conducted the first comprehensive analysis of the scientific workload and its relationship to the performance of supercomputers. In 1984, Dr. Martin joined IBM as a Research Staff Member at the Thomas J. Watson Research Center to continue her research into supercomputer performance evaluation and measurement. She was appointed a Senior Technical Staff Member in 1993, and elected to the IBM Academy in 1997. Dr. Martin is currently a member of the Academy's Technology Council.

Gwynne Shotwell is President of Space Exploration Technologies Corporation (SpaceX), responsible for day-to-day operations and for managing all customer and strategic relations to support company growth. She joined SpaceX in 2002 as Vice President of Business Development and built the Falcon vehicle family manifest to over 40 launches, representing over $3 billion in revenue. Ms. Shotwell is a member of the SpaceX Board of Directors.

Prior, Ms. Shotwell spent more than ten years at the Aerospace Corporation, where she held positions in Space Systems Engineering & Technology as well as Project Management. She was promoted to Chief Engineer of an MLV-class satellite program, managed a landmark study for the Federal Aviation Administration on commercial space transportation, and completed an extensive analysis of space policy for NASA's future investment in space transportation. Ms. Shotwell was subsequently recruited to be Director of Microcosm's Space Systems Division, where she served on the executive committee and directed corporate business development.

In 2004, she was elected statewide to the California Space Authority Board of Directors and served on its executive committee; she has also served as an officer of the AIAA Space Systems Technical Committee. Ms. Shotwell participates in a variety of STEM (Science, Engineering, Technology, and Mathematics)-related programs, including the Frank J. Redd Student Scholarship Competition; under her leadership the committee raised over $350,000 in scholarships in six years.

Co-Host, The Sword and Laser

Veronica is a technology and gaming-centric video host based out of San Francisco. Currently her projects include Tekzilla (a weekly tech help and how-to show on Revision3.com), and The Sword and Laser, a science fiction and fantasy podcast and community, co-hosted with Tom Merritt. She has also written for Slate, DoubleX, MaximumPC and PC Gamer, and was the original host of Qore on the PlayStation Network.

Veronica initially made her mark as a producer and on-air talent for CNET Networks (now CBS Interactive). She worked on such shows as Buzz Out Loud, MP3 Insider, Crave, and Prizefight. In 2007 she left CNET to host the eclectic video show Mahalo Daily, which was named one of the top new podcasts in 2008 on iTunes.

An avid gamer and social-networking fanatic (with over 1 million Twitter followers), Veronica often speaks about her interests at conferences and panels. She has also been the emcee at events for companies such as gdgt, Boxee, MacHeist and RiffTrax, and advises for companies such as About.me, gdgt, GoodReads, Soundtracking, WeGame, and others.

All Sponsors  |  All Exhibitors