Business Not As Usual: Creating A Safe Space to Talk About Race 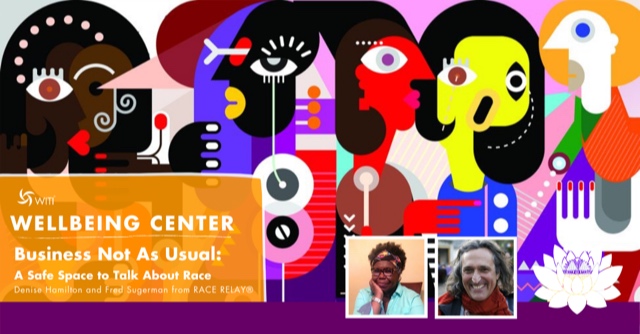 Please join us from 1:15-3PM PDT (4:15-6PM EDT) as Denise Hamilton and Fred Sugerman from RACE RELAY (TM) create a safe space to talk about race.
The mission of RACE RELAY (TM) is to demonstrate – story is medicine and sharing stories with empathy at the core can be healing. So the healing begins with the process of hearing stories having a common thread; a thread that ties all human beings together – through our desires, our fears, and our racial biases. The intention of RACE RELAY (TM) is to dissolve disunity among those who are seated together, enable them to see a pattern to our biases, and perhaps go beyond tolerance to understand the commonality of our frailties.
Please note: We encourage you to join Mindfulness and Movement with Fred Sugerman at 12PM PDT (3PM EDT) which will immediately precede this session.

Denise Hamilton has over 30 years experience as a writer and producer for television network specials and syndicated programs, as well as stage director. In the area of documentary and broadcast journalism, she was writer and field producer for four internationally-shot documentaries. Prior to moving to Los Angeles she was active in arts administration, serving as a program director at the New York Foundation for the Arts, director of Education Programs for the Roundabout Theatre Company, and a Commissioner with the Kennedy Center for the Performing Arts, Wash. D.C. Presently she teaches documentary filmmaking at the New York Film Academy, Los Angeles campus. Her multi-media theatre piece “Parallax: In Honor of Daisy Bates” is published in the anthology WOMEN HEROES: Six Short Plays, and produced by The Women’s Project of the American Place Theatre, New York City.
Over the past four years, within her capacity as a Project Director for RACE RELAY (TM) gatherings, she has conducted dozens of ongoing community engagement dialogues in Culver City through Common Peace Center for the Advancement of Nonviolence.

Fred Sugerman is a movement artist, educator, and founder of Medicine Dance. He has an inquiring mind, fierce spirit, and curious body informed by mindfulness, traditional theater, and dance. Fred runs weekly classes, monthly workshops, movement arts laboratories, facilitator trainings, international immersions or retreats, and has a private practice. He is co-creator and interventionist for "Mindful Movement for Breast Cancer Survivors," which has been the subject of research sponsored through the City of Hope, as well as the John Wayne Cancer Institute at Providence St. John's Health Center.