Finding your Voice as a #METOO Survivor and Empowering Advocacy 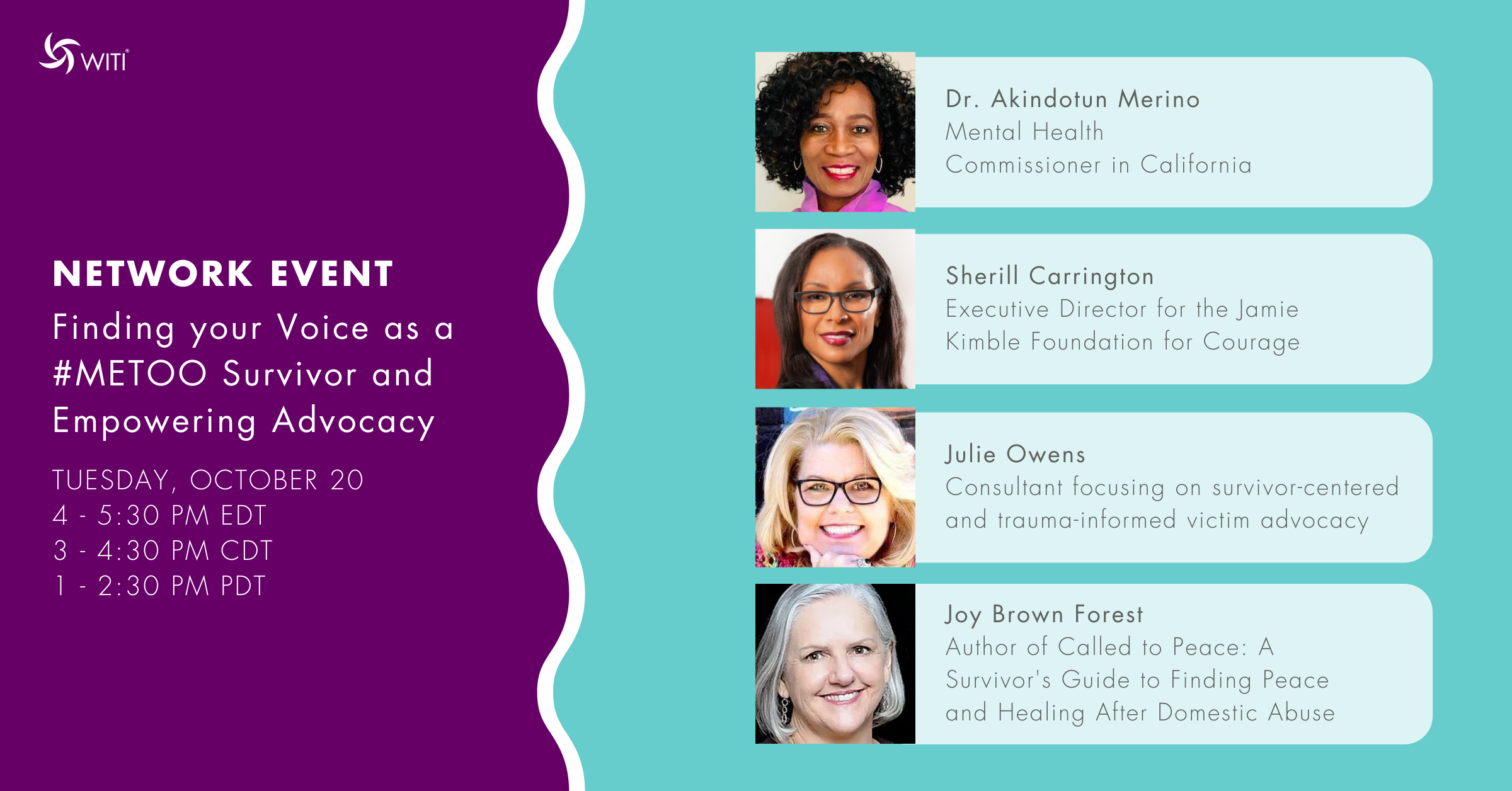 October 11 is the International Day of the girl child. The panelists will discuss the root causes of domestic violence, why women find it difficult to leave abusive relationships, the resources in the community and workplaces to support women, and the policies to prevent domestic violence and support survivors. This will be an interactive discussion where the panelists will answer questions from the audience.

Dr. Akindotun Merino is a strategic leader who clearly articulates the remarkable transformation of human experiences through the application of mental health, education and leadership concepts.

You will be inspired to restore fractured lives into sustainable legacies.
Through conferences, workshops and trainings, Dr. Merino teaches people to rearrange mindsets in order to achieve more fulfilling lives and create portals of success in their families and communities. People must renegotiate the conversations in their minds into powerful stories of harmony and healing.

Dr. Merino serves as a Mental Health Commissioner in California. She is a Family Psychologist, Professor of Psychology and CEO of Jars Group, LLC. She's served as University Vice President in Southern California. She has authored several books and papers. Akindotun lives in California with her family.

Sherill Carrington is the Executive Director for the Jamie Kimble Foundation for Courage which focuses on prevention, education, awareness and research for youth and young adults.

Carrington join JKFFC in 2018. She previously served as the Assistant Vice President of Major Gifts and Leadership Giving campaigns at United Way of Central Carolina from May 2007 to October 2018. There she lead workplace fundraising efforts for the organization’s development department and was responsible for the management of the top five accounts and high wealth donors totaling 60 percent of the campaign (approximately $15 million).

Sherill brings more than 25 years of experience skilled in nonprofit philanthropic strategies that support work addressing basic needs, family systems and counseling services. She has been a nonprofit Executive for a little over fifteen years. Her philosophical ideas reflect the Foundation’s vision for the organization's growth and development in the areas of prevention, education, awareness and research.

Before relocating to Charlotte, NC Sherill worked 10 years at DePelchin Children’s Center in Houston, TX as the Marketing Director. While at DPC she brokered partnerships with media outlets that increased the agency’s level of expertise as the agency of choice from 42% to 98%.

Sherill received her Bachelor’s degree in Marketing and Communications from the University of Central Oklahoma and a Master’s of Science in Counseling, with an emphasis in Marriage and Family Therapy, from Southern Nazarene University in Bethany, Ok.

She is an active volunteer of several non-profits that support child athletics and healthy lifestyles for young adults. Sherill is married to Darryl Carrington of 28 years and has a 14-year-old son, Darryl Carrington, II who plays travel football and basketball.

Julie Owens survived a DV kidnapping and stabbing in 1988, then developed DV programs including hospital and counselor training programs, an ER crisis team and a faith-based shelter. Her story is in the documentary “Broken Vows: Religious Perspectives on Domestic Violence”. She has directed DV trauma research at the National Center for PTSD, coordinated DV efforts in a mental health authority, counseled substance-using survivors, and overseen victim service agencies. Julie works nationally and globally to training employees of governments and businesses, including the Bank of America. She's an Expert Consultant who has consulted for the U.S. Dept of Justice Office for Victims of Crime, the U.S. DHHS National Human Trafficking, the U.S. Dept. of State, and the Bank of America. Julie's focus is on survivor-centered and trauma-informed victim advocacy in secular and faith-based settings.

Joy Brown Forest has been an advocate for victims of domestic violence since 1997 and is author of Called to Peace: A Survivor's Guide to Finding Peace and Healing After Domestic Abuse and the Called to Peace Companion Workbook. She holds an M.A. in Biblical Counseling from Southeastern Baptist Theological Seminary and held the position of Community Educator for Safe Space Domestic Violence Services in Louisburg, NC from 2000-2001. She has served as a biblical counselor in church settings and private practice since 2005. Her own experiences as a former victim of domestic abuse, along with her involvement with Safe Space and church counseling, caused her to see a major need for churches to become better equipped to help families affected by DV.

In January 2015, she helped establish Called to Peace to promote domestic violence awareness, particularly within the faith community. Joy is also a Certified Advocate with the NC Coalition Against Domestic Violence. The twofold purpose of Called to Peace Ministries is to provide education to those interested in learning effective strategies for dealing with family violence and to provide practical assistance to those affected by it. Joy has spoken on domestic abuse in a variety of venues from seminary classrooms, to seminars and conferences, to radio and television. Her blog contains many articles on domestic abuse, as well as posts on other counseling issues and victorious Christian living. In her spare time, Joy loves traveling and spending time with her family - especially her 10 grandchildren.